Question from the Audience: Bunny Slipper Love... The Importance of Spaying and Neutering

A question from Katie R. in Boston, MA:
Q: I have a male newfoundland dwarf bunny, Max. I was away this weekend and my brother took care of him. Anyway we got back to my apartment and an hour after returning home, he basically showed obviously signs he's "in heat" and has countless times tried to initiate sexual relations with my bunny slippers. Been following me around my apartment trying to get whatever he can. I've had him since July 08 and this is the first time I've seen him do this before. Any suggestions? 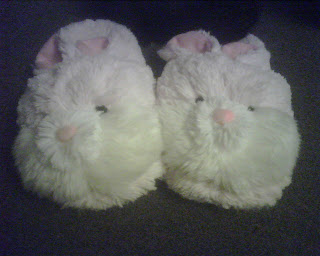 A: Congratulations! Max is becoming a man. Or at least, he's reached sexual maturity. The cute, funny behaviors that he's displaying are only cute and funny the first few times. Then, they get annoying quickly, and you'll soon start noticing behaviors that are by nobody's definition cute nor funny. While some behaviors, like territorial marking, are a hassle to clean up, other behaviors have far graver consequences. Max can and should get fixed at this point. Since the surgery is safe for males after 5 months (and safe for females after 6 months), you can go ahead with the procedure. Not convinced? Let's overview the benefits of getting your house rabbit spayed or neutered:

Health
Fixed rabbits live much longer lives as they avoid an array of health complications, such as various reproductive cancers and injuries from raging-hormone-induced fights or aggressive sexual behaviors among one another. An unspayed female has a 70-80% chance of developing uterine cancer. Testicular cancer, while not as common as uterine cancer, is a possibility for intact males.

Behavior
Rabbits that have been fixed are calmer and more relaxed; they are also much less aggressive. (I have a scar on my forearm to prove that even the nicest bunny can take a vicious chunk out of your arm in the heat of the moment!) Spaying and neutering also reduces destructive behaviors, especially in females who may be digging and destroying your furniture in an attempt to prepare for (real or imagined) pregnancies. Many behaviors that accompany an intact bunny--humping, circling and chasing--start off being cute, but quickly turn annoying and overwhelming, and sometimes even aggressive and dangerous.

Litterbox Training
It's notably easier to litterbox train a rabbit who's been fixed. Additionally, unneutered males (and females) will oftentimes spray urine, sometimes to shocking distances, in an effort to mark their territory. Such territorial marking becomes an overwhelming hassle to clean up day after day.

Friends
Once your rabbit is fixed, she can have as many friends as she likes. Rabbits are social animals and the majority of them thoroughly enjoy the company of other rabbits. However, until the surgery, it's dangerous to put two rabbits together, for fear of fighting and the overwhelming risk of pregnancies.

Overpopulation
There's a good reason rabbits crop up in all sorts of saying about procreating--they reproduce with mind-blowing efficiency and in great quantities. Putting an unfixed male and female together will inevitably result in litter after litter of baby bunnies. With so many homeless rabbits waiting at shelters across the country, it just isn't right to introduce any more animals into the mix. Even if you somehow are able to find homes for the babies, those babies are taking the places of shelter rabbits who may be put down for lack of space.

The bottom line is that spayed and neutered rabbits simply make better pets. They are happier and more interested in bonding with their human companions once the undeniable and all-consuming urge to copulate is removed. With numerous behavioral problems and medical complications virtually eliminated, it makes sense to proceed with this safe and highly successful surgery. Get Max to a rabbit-experienced vet as soon as possible. With the irrefutable benefits, there's no way around it--it's the single best thing you can do for your pet, other rabbits, and you!
Posted by The Rabbit Advocate at 4:19 PM