The third and final installment in the housing series focuses on the most important feature in the rabbit pen: the litterbox.

Many rabbits spend a lot of time in their litterboxes, and use it not solely for elimination and hay consumption, but also view it as a comfortable place to take a nap, groom, or just hang out.

Accordingly, the box itself  needs to be spacious enough to allow the rabbit to move around comfortably. For a medium-sized single rabbit, a cat litterbox, such as this one from Target, works perfectly. For a larger breed, or for a bonded pair or trio, invest instead in a large plastic container. They are large, cheap, and easy to clean. With multiple rabbits, I recommend having multiple litterboxes to increase chance of good habits. Multiple litterboxes are a good idea also if the rabbit-proofed area is large or encompasses several rooms.

Litterboxes should be cleaned frequently, about every three days, especially to avoid the buildup of ammonia that can cause respiratory issues when it becomes too concentrated.

Setting up the Litterbox
I recommend lining the box with newspaper before adding a few inches of rabbit-safe litter. Carefresh and Yesterday’s News are great options for odor absorption and wood stove pellets are a great economical option. Some people like aspen shavings, but be sure to avoid pine or cedar chips as those have been linked to health issues. Additionally, avoid any clumping or dusty cat litters.

Place a large amount of quality grass hay on one side of the litterbox and make sure the hay is replenished frequently. There should always be a generous portion of hay in the box, as it is integral for a rabbit's well-being. Rabbits tend to eat the hay from one side of the box and use the other side of the box for elimination purposes.

Common Litterbox Problems
Tipping over the box
If your rabbit is repeatedly tipping over his or her litterbox, switch to a larger and more substantial litterbox. You can also try switching to a heavier type of litter (wood stove pellets, for instance, are heavier than Carefresh, etc). For the really persistent rabbits, you can secure the box to the side of the cage/pen with some heavy duty zip ties. This problem, like most others, usually stems from boredom, so addressing the root of the problem is also integral.

Digging in box
Nothing is more infuriating than coming home to an empty litterbox with the contents spread all around the floor next to it. A homemade or purchased grate can stop this problem easily.

Not using box
A rabbit who suddenly refuses to use a litterbox could be suffering from a medical issue, such as a urinary tract infection or stones, or even a neurologic or orthopedic problem preventing physical entry into the box. A young rabbit messing up previously perfect litterbox habits usually results from an increase in hormones as he or she enters puberty. All these warrant a visit to the veterinarian.

Lack of proper litterbox habits could be behavioral as well. Is the litterbox too dirty to be appealing? Does the rabbit prefer another type of litter? Is the box large enough to be accommodating? Some rabbits may need to be re-trained to use the litterbox.

Urinating next to box
Your rabbit is using the litterbox and yet you find urine next to or under the box. This is an indication  she may be urinating over the edge of the box. Watch closely the next time she urinates and you’ll notice her raising her hind end ever so slightly prior to urination. If the edges of the box are too low, your rabbit could accidently be missing the box. Try a box with a higher edge, one that is larger, or even a covered cat litterbox.

Are there any other problems I haven’t covered? Leave them in the comments section and I will address them as I can!

Please check out this story of a rescued rabbit, Jeni-Bun down in Tennessee. Clover Patch Sanctuary is trying to raise funds for her surgery and medical treatments. See here for more information and donate if you can, and share this brave little girl's story!

Spread the word about keeping bunnies out of Easter baskets. Rabbits are not toys; they are a 10 year commitment! 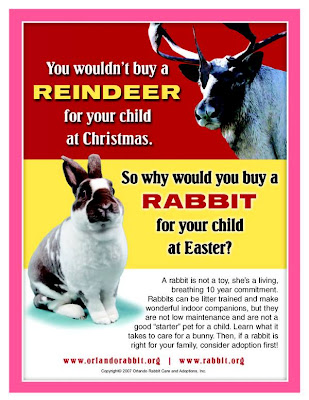 And check out this fabulous article from our friends at DugDug about rabbits, their care, and their role at Easter time!

The second installment in the housing series describes ideas for the rabbit's actual cage/pen set-up.

Cages sold at pet stores for rabbits tend to be very small except for the tiniest of rabbits, therefore invest instead in a large dog crate, or better yet, a puppy exercise pen. The pens allow more freedom, are easier to clean, and easier to manipulate, move, and store. They are versatile in the spaces they can fit, too.

When setting up the rabbit’s living area, feel free to get creative. However, certain rules should be followed to ensure the safety and needs of the animal are met.

First, the floor of the living quarters should be solid, that is, not wire-bottomed. Rabbits can develop “sore hocks” (ulcerative pododermatitis) from standing on wire all day. The bottoms of rabbit feet are covered in fur only and can get traumatized from uneven surfaces. Some breeds are more predisposed to this than others (for instance, the Rex breeds). For messier rabbits, I like to line the bottom of the pen with a vinyl floor protector (like this one, available from Walmart).  Most rabbits appreciate having a soft carpet to lie on as well.

The cage or pen needs to be large enough so that the rabbit can comfortably hop around and stand up on her hind legs without hitting her head. The bigger, the better.

The rabbit’s house should include a large litterbox and bowls for food and water. I also recommend having an assortment of toys such as tunnels, cardboard boxes, cardboard rolls stuffed with hay, hay twists, stuffed animals, and a hidey box.

Posted by The Rabbit Advocate at 9:49 PM 2 comments:

The first of three installments in the Housing Series deals with variations in housing possibilities.

I’m often asked about the best way to house rabbits. Of course, indoor housing is a must. But once inside, should a rabbit be caged? Penned? Allowed free-range?

While many bunny owners allow their rabbits to live in a free-range environment 24/7, this decision should be influenced by a variety of factors. First, consider the available space: is there an entire room that can be closed off and completely rabbit-proofed? If not, then keeping your rabbits penned up while you're gone may be a safer option.

Consider also the naughtiness level of the rabbit in question. Some rabbits are less inclined to chew and dig, and these guys are prime candidates for a free-range situation. In others, these behaviors are deeply ingrained and keeping them in some sort of containing structure (dog crate, pen) while they are unsupervised is highly recommended. As long as you allow your rabbits several hours of out-of-cage time daily, using a pen or large dog crate is perfectly acceptable.

Picking the area of the house to place the pen should be thoroughly planned out. It’s important that your rabbit be kept in a relatively high-traffic area of the house, such as the living room. This keeps the animal from becoming isolated and bored, and also makes giving the rabbit out-of-pen time easier. You should not have to pick up and carry your rabbit to a room where he or she can lounge—the constant chasing around and picking up is not conducive to a harmonious relationship.

It is much easier to keep the pen in an area of the house where you spend the most amount of time, and simply open the pen and let your rabbit out when you're home. When it’s time to pen her up, train her to hop to her pen for a treat. This is much lower stress, and with rabbits, the lower the stress, the better for everyone.

Stay tuned for the second installment in the Housing Series, in which we will explore setting up the perfect rabbit pen!
Posted by The Rabbit Advocate at 9:11 PM 1 comment:

Thanks to comedienne Amy Sedaris and HRS Educator Mary Cotter for this excellent video!
Posted by The Rabbit Advocate at 2:50 PM 3 comments:

I know all of us bunnyparents look forward to the Easter holiday season and the sudden availability of all imaginable rabbit-shaped objects that comes along with it. But while we’re enjoying the bunny cards and figurines, we need to realize that Easter is also a terrible time for many rabbits. Year after year, unsuspecting parents buy real baby bunnies to put in their children’s Easter baskets alongside jelly beans and chocolate eggs. Weeks later, these rabbits are dumped at shelters or (even worse) released into the wild, when the family slowly realizes that rabbits are not perfectly behaved inanimate objects.
As you and I know, rabbits are not toys, and they’re certainly not appropriate gifts for young children. Help spread the word to people in your area by writing in to your local newspaper, putting up posters at obliging shops/malls/grocery stores/veterinary clinics, or simply talking to friends and family about the commitment involved in owning a rabbit. Shelter and rescue volunteers have already begun spreading the word all over the country and I urge you to reach out and educate your local town or city about choosing toy rabbits for Easter, and adopting real rabbits for life. 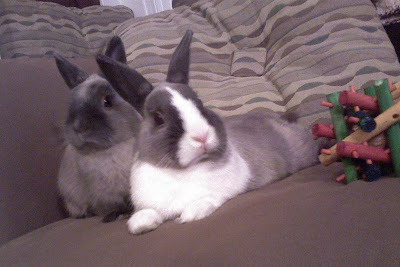 While Peanut (left) and Jimmy may look like toys, these 3 lb. dwarf rabbits are real-life bunny brothers, adopted for life by Caroline and Matt in Boston, MA.


To read more about a national Easter awareness initiative, check out the House Rabbit Society’s Make Mine Chocolate campaign.
Posted by The Rabbit Advocate at 9:14 PM 6 comments: