Malocclusion, referring to the misalignment of teeth, is a common ailment of the house rabbit. As with dogs bred to have “cute” smushed-in faces, certain breeds of rabbit, like the dwarf varieties, are especially prone to congenital deformities of the mouth. What makes malocclusion so serious for bunnies, however, is that rabbit teeth grow continuously. Normally, their teeth match up perfectly, so they’re kept ground down by the action of chewing. (Just one more reason giving your rabbit unlimited hay is so important!) Since maloccluded incisors don't match up, the teeth don’t file down and instead continue growing endlessly. As the incisors become overgrown, eating and drinking become harder and harder for the rabbit, all the while causing significant discomfort inside and outside the mouth as the teeth grow into the roof of the mouth and dig into the surrounding skin of the face. Untreated, this malformation can cause a slow and painful death.

Trimming teeth is not recommended because microfractures, a common sequelae, can lead to tooth root abscesses. Grinding down the teeth every two months or so is sometimes the only viable solution for the cheek teeth; but maloccluded incisors can also be extracted, fixing the problems permanently.

Recently, a rabbit with malocclusion and severely overgrown incisors arrived at the local shelter. Due to his complicated and chronic medical condition, he was slated for euthanasia.

I, on the other hand, wasn’t ready to give up that easily. After consulting with some fellow rabbit experts at House Rabbit Network, I learned that extracting the rabbit's incisors could give him a chance at being healthy, and therefore, adoption. It seemed simple enough—the defective six front teeth would be removed, and after the mouth healed, he would learn to use his lips to pick up food and use the rest of his 22 teeth to grind his food. I spoke with a fantastic veterinarian at the VCA Wakefield Animal Hospital who explained that the surgery was relatively straightforward, the recovery was minimal, and, she said, the rabbit would be as good as new when it was over. In fact, he would even have a slight advantage over rabbits looking for homes—with no front teeth, rabbit-proofing would be a breeze!
I immediately brought the rabbit, who I had named Charley, home. He was severely underweight and malnourished from weeks of eating difficulties, so I spent a couple days feeding him a high-calorie, high-fiber, easy-to-chew diet, which included Critical Care, oatmeal, canned pumpkin, vegetable medley baby food, chopped strawberries, collard greens and cilantro, and even timothy hay broken into small, bite-sized bits. He chowed down for two days straight, and proved his will to live by bouncing all over my house and spending hours sleeping in my lap. Fortunately, House Rabbit Network had offered to foot the bill for the surgery, so after he had regained some strength, we were ready. On an early Wednesday morning, we drove up to and Charley had his six front teeth pulled (he was also neutered at the same time). I picked him up that evening, and he was, though drugged, already acting a little feisty. By the next morning, he was eating Critical Care and pumpkin mush and three days later was eating entire bowls of pellets, chopped up greens, and even his hay.
He’s now a happy, rambunctious little guy, and might I add, perfectly adoptable. I hope this story inspires other owners and shelters with rabbits with dental problems to consider this alternative. As Charley sprints around my living room like a maniac, I can say with full confidence, that incisor extraction is a fantastically helpful surgery, a procedure we would both recommend to anyone. 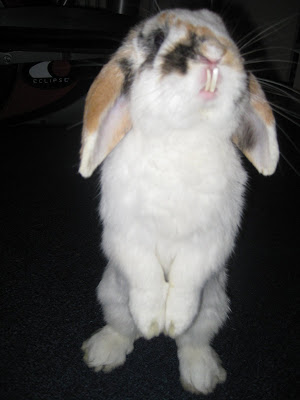 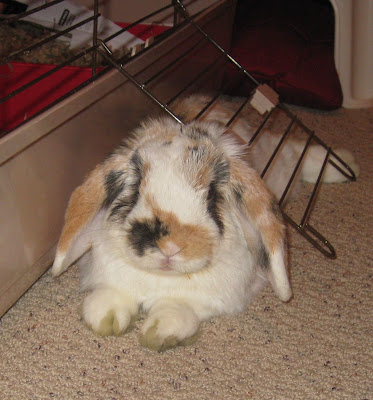 Charley After
Posted by The Rabbit Advocate at 5:13 PM 23 comments: