Question from the Audience: Bunny Boredom

A question from Eileen R. in East Meadow, NY:
Q: I am a first time rabbit owner. Over the past year and half that I've owned Cannoli, I have learned a lot about rabbits. I have a few problems. He chews the bars to his cage even when he's not enclosed in it! He has full range of my bedroom with the cage open for his litter, water, food and hay. At 6am he will get into his cage and start chewing the bars for no reason! He will have food, water and hay in his cage so there is no reason for him to be making such a ruckus.
I know I shouldn't leave him out while I'm at work, but he is just so hard to get back in the cage! He is also extremely smart. If he is in his cage eating or drinking and sees me walking towards it, its like someone put a fire under his butt and he runs out the cage and to the other end of the room thinking I'm going to lock him in there! Any advice would be appreciated thanks!

A: Rabbits, being the highly intelligent creatures that they are, get bored easily if they are understimulated. And it sounds like that is exactly what Cannoli is trying to tell you: he wants attention!
Here are a few ideas to spice things up and keep him entertained:
1) Cannoli is probably craving interaction with you. Spend some time on the ground with him. Pet him, talk to him, offer him a piece of an apple. Try teaching him a new trick! If you're just watching TV, forgo the couch and sit on the floor with Cannoli.
2) Invest in a new toy or two. Since he obviously likes to chew, chew toys are a great choice. There's also some great baby or cat toys that work for rabbits too.
3) Let Cannoli explore a different room in the house. You'd be surprised how exciting this is for them. New smells, new objects, new view! Just watch out for new trouble and rabbit-proof beforehand.
4) Set up an exercise pen outside and let him explore the garden. If you have a very calm rabbit, you can even use a harness and leash, provided you are careful. Always supervise your rabbit when he's outside-- birds, domestic cats or dogs, raccoons, etc. can attack at any moment.
5) Set up a destruction corner, as I like to call it, with a big basket stuffed with newspaper, hay, cardboard, toys, etc. and allow him to make a mess. You can set up a destruction area outside with potting soil where he can dig around. It doesn't get much funner than that!
6) Consider adopting a friend for Cannoli. Bonded bunnies entertain each other and don't feel as lonely or bored. Remember, busy bunnies are less likely to cause trouble.
7) Note that rabbits are most active during dawn and dusk, which explains Cannoli's high-level of activity at 6am!
8) If Cannoli hasn't been neutered, get that done. All those adolescent hormones make for a crazy, rebellious troublemaker. Rabbits grow much calmer and more well-behaved after the surgery.

Don't worry too much about Cannoli's feistiness. He's still young. As rabbits grow older, they tend to calm down and behave better. Right now he's still filled with energy and is overactive, which, just like children, oftentimes manifests itself in destructive behaviors. 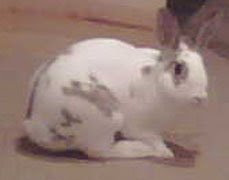 Cannoli says, "But look how cute and innocent I look!"
In regards to Cannoli's cage aversion, try making his cage a positive, fun, safe place to be. Try to figure out why Cannoli would have developed such negative feelings toward his cage. Perhaps it's not big enough and he feels uncomfortable there? Maybe he finds the cage boring? Fill it with hay, toys, an ice cream mineral chew, dangling cat toys, fun-to-chew carpet squares, and hidden treats. Make sure the cage and litterbox are cleaned often; rabbits have sensitive noses and don't like being subjected to strong odors.

Cannoli is extremely smart for running out of the cage when he can tell you are planning to lock him up. Decondition this response by casually walking over to his cage several times a day and closing him in only one out of every ten times. Reduce the severity of getting caged in by sometimes letting him back out 5-10 minutes later. Avoid chasing Cannoli into his cage, as this will correlate cage time with punishment, or something he is forced to do. Instead, coax him in there with a treat, so that he views cage time is an option or a choice of his own free will.
Posted by The Rabbit Advocate at 6:53 PM

thanks so much for all ur help. i showed my aunt what u wrote and we understood cannoli's needs so much better. i am def. going to spend more time with him and give him the attention he needs and deserves. i tried one time to put him in the yard in a babygate and he jumped over the babygate lol. I then put the cage outside and he was so scared! I hear rabbits have the capability to have heart attacks and i was afraid he'd get too scared.

You also can feel a lot less guilty about leaving your rabbit caged during the day by increasing the size of his enclosure as much as possible. One great way to do this is to surround his cage with an exercise ring pen (similar to what you might get for a dog) and then leave his cage door open to allow him limited freedom outside of his cage during the day. Exercise ring pens come in various heights and you probably will want a taller one, since Cannoli was able to lead a babygate in a single bound. They even make roofs for exercise ring pens in case Cannoli is a world class jumper! (Go to "http://www.petedge.com" and navigate to their "Home and Kennel" section and then click on the EXERCISE PENS link to see a number of examples.)

If your cage is large enough, you might consider adding shelves as one way to maximize Cannoli's available space. Also consider building a Rabbit Cube Condo, since you can easily create a supersized cage and customize it to you and your bunny’s content! (To find out more info on Rabbit Cube Condos, do a Google search and you will find lots of great websites.) Lastly, large dog crates also work well as large rabbit enclosures; being quite tall, dog crates usually accommodate shelves quite well.

With the holidays coming, you might also consider getting Cannoli a Cottontail Cottage. You can buy one at http://www.catsandrabbitsandmore.com/cottontail_cottages or http://www.busybunny.com/catalog/cottontail-cottage-bb-25.htm. They are relatively inexpensive. You can also get some empty cardboard boxes, cut entranceways into them and arrange them together to form a maze for Cannoli to explore! You'll be surprised how much fun you can have through coming up with creative ways to entertain your rabbit!