How to Litterbox Train Your Rabbit

One of the little known facts by outsiders about rabbits is that they can easily be litterbox-trained. Rabbits are naturally clean pets and most of them will actually teach themselves to use the litterbox. In fact, your bunny will often choose a spot in her cage that she considers her bathroom corner, so once you place a litterbox in that spot, the process of litter-training is complete. For many rabbits, it's as easy as that. For others, though, it might take a little extra time and effort.

For the "extra time and effort" bunnies, here are a few tips:
1) If your rabbit is soiling in several places, pick out the consistent spots and place litterboxes down there. If it means having two litterboxes inside the cage, that's fine. As they start improving, slowly wean them down to just one.

2) While she is still learning to use the box, you'll want to closely supervise and limit her play area. If your rabbit gets overwhelmed at a sudden abundance of space, she could forget about her box. Therefore, start small and increase gradually. Once she is box-trained, she will know to run in her cage to use the bathroom.

3) Throw some hay in the litterbox. This will encourage your rabbit's natural association between bathroom behavior and social chewing. Additionally, the more time they spend in their litterbox, the greater their likelihood of forming good litterbox habbits.

4) Consider that older rabbits are easier to train than young ones. So if she's young, don't worry; be patient. If she's older, be extra patient and don't give up! Experiment with the aforementioned tips. Try switching up the type of litter or get a different kind of litterbox. Put treats or toys in the box; and make sure to never bother her while she's in there.

5) Clean the litterbox about two or three times a week. This is just enough to make it clean and inviting, but not so sanitary that her ownership of the box is questioned daily. When cleaning the box, I like to splash some regular white vinegar on the bottom and let it soak with water for ten minutes. Vinegar removes the calcium buildup from the urine, without introducing any harsh chemicals.

6) If she's accidentally leaving some droppings in her cage, don't worry. A few territorial markings are completely natural and acceptable, and even the most well-trained rabbit will partake in this activity.

7) Lastly, the most important thing you can do to litterbox train your rabbit is neuter and spay. Males and females practice territorial spraying and droppings, so until your rabbit is fixed, don't be surprised if she has spotty litterbox habits. 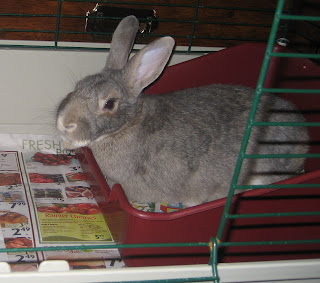 Baloo napping in his litterbox

The litter:
The best litter I've found is Yesterday's News cat litter. It's made from recycled newspapers, so it's even good for the environment. Additionally, it's absorbent, odor-reducing, affordable and non-allergenic. Carefresh is a similar product. You could also use regular old newspapers or hay but these aren't as odor absorbing. Avoid clay cat litter as it is a possible respiratory irritant, and the clumping kind should specifically be avoided because it is dangerous when ingested. Cedar and pine chips, though sold in most pet stores, can cause liver problems.

The litterbox:
Use a box that the rabbit can comfortably sit and turn around in. Make sure the sides are tall enough so the rabbit doesn't accidentally dribble over the edge, but not so high that she has trouble getting in. You can buy a litter pan from a pet store, but a large plastic storage container works just as well.

Posted by The Rabbit Advocate at 1:19 PM

The rabbit formerly known as Woodstock is settling into his crate. He's really taken to pooping in the middle of his crate (about the same size as graysie's). Should I put another litter box there as well? I feel like the entire crate will become a litter box...I've put a huge amount of timothy hay for him to settle in...and i've moved his food dish to the litter box (bad idea? should i get the kind that attaches to the side of the crate so it can float above the litter box?)

I may need to call in the stressless groomers soon, too....

One of the little known facts by outsiders about rabbits is that they can ... rabbitbedding.blogspot.com