While bunnies are known mostly as quiet, passive animals, they actually produce quite an array of sounds. Some sounds are discreet and you have to pay close attention to catch them, others are loud and unmistakable. It's important to know these noises and what they might mean in order to better understand your rabbit or know if she is in pain and needs attention.

Honking
These happy little grunting sounds, called "honking," are like a love song. Often loudest and most prominent in intact males and females as they circle your feet or perform other amorous behaviors, but fixed bunnies also can make this cute noise to express affection or admiration.

Purring
Rabbits purr by quietly grinding their teeth or chewing air when they are being pet and are happy and content with life.

Loud teeth grinding
A rabbit that is lying on the ground with her arms and legs drawn in close to her body, making clearly audible chomping sounds is in severe pain and needs medical attention right away.

Screaming
A shrill, high-pitched scream that comes for an injured rabbit right before death. I've never heard this, nor do I ever want to!

Growling
This unmistakable sound is produced by rabbits right before they attack or bite. Could be at a human, another bunny, or another animal. Often accompanied by a double front paw lunge forward. Rabbits with attitude growl when defending themselves or their territory or when expressing general disdain toward a variety of situations.

Hissing
Also done right before an attack and in correlation with lunging. This rabbit is angry!

Thumping
Thumping or drumming with the hind legs means the rabbit is aware of some apparent danger and is trying to either warn it off or warn others. The sound of the thump and the resulting vibrations in the ground would be felt by other rabbits in the wild, who would perceive it as a warning sign. When this occurs at home, simply tell your rabbit "everything's okay," in a reassuring voice. Rabbits may also thump to express disapproval or disgruntlement.

Squeaking
I've heard multiple stories of rabbits squeaking, but I've yet to come across it myself.

Snoring
Some rabbits snore or moan in their sleep. These bunnies are usually on the portly side.

Snorting
Every now and then a rabbit will emit a surprisingly loud snort.

Hiccups
Yes, rabbits can hiccup! They make little hiccup-like noises and look as if they are spasming for a few minutes. 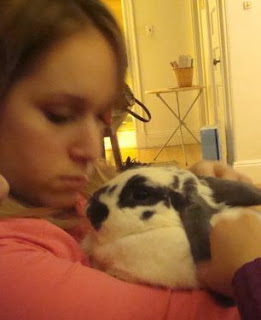 It's fun to try communicating with your rabbit through their language. For instance, whenever my rabbit, Graysie, is lying on the couch with me and purring, I grind my teeth too. Often, she responds by licking my face and grinding back. I don't have to tell you this nonverbal exchange undeniably means, "I love you!"
Posted by The Rabbit Advocate at 8:43 AM

My bunny whimpers/whines..... I have witnessed it when he was cleaning his ears....it was crazy!

My rabbit comes over to are feet,licks,bites and then humps them.
Does he think my foot is a female rabbit?
Or he wants us to get up and play?
Its bazaar.

my bunny is so cute

My bunny does a soft vibrating with his back legs. It's not a warning thump or scared thump. What does it mean?

My bunny is making a weird loud grinding noise and im scared i dont know what to do?!!

My rabbit makes honking and growling noises and batting his toys with his paws. But it's only lunging and hitting them with his paws. He also makes those noises and runs after me when I go to the fridge. He's even nipped my ankles (not hard) when I'm getting something from the fridge. He's 7 years old and neutered. I thought neutering him would calm him down but it didn't help. His vet thinks he's playing or thinks it's a game or something when he's batting things, making his honking/growling noises and nipping my ankles. Just a bit confused with the different noises and his behavior.