Question from the Audience: Getting to Know You

A question from Linda M. in San Jose, CA
Q: I have a 2 year old spayed female (Trixie) that I adopted about 2 months ago. Last weekend I took her to an adoption fair and there were two neutered male rabbits she liked so I adopted one of them (Jack). They have been doing really well and progressing quickly as I can tell from some of the other stories I read out there. I have only had Jack in the house for 4 days now and they already can peacefully co-exist in the same territory for the most part. Trixie has run of the house so I set up a pen for Jack, just so I could keep them separated if I needed to. I started out with the bathtub as neutral territory and moved from there. I didn't expect to be in common territory yet, but they kept approaching each other through the pen so I thought I would give it a whirl.
There is no aggression (no growling, biting, fisticuffing), but Jack is more interested than Trixie. He will nudge his head down looking for attention & sometimes she will groom him for 15 seconds or so and sometimes she will trot off to go find something more exciting. So then Jack follows her and nudges again. If she continues to ignore him then he gets persistent and will start to chase her or mount her. She is starting to hide and be more reclusive because she doesn't want to be bothered by him. So, is this a match that won't work because of their differing interest levels, or will one of them eventually come around to meet the expectations of the other? I hate to see poor Trixie uncomfortable or unhappy in her own home.

A: I know how hard it is to see your rabbit uncomfortable in her own home, especially when you feel the newcomer is picking on her, but it sounds like these two are progressing perfectly. After only four days, they are still in the "getting to know you" phase and even though Trixie seems slightly less interested in becoming friends, this is part of the process of determining dominance and finding a balance. Grooming, ignoring, and lack of true aggression are all positive signs in this initial phase. These behaviors all constitute the process of finding the perfect balance for their relationship. Your method of using the neutral territory of the bathtub was ideal—you probably avoided some aggression because they were introduced in a neutral space.

For the time being, make sure Trixie doesn't react aggressively to Jack's chasing; it's actually better if Trixie is willingly running away. Keep a close eye on mounting behaviors; stop it immediately if Jack mounts Trixie head-first (this could be very dangerous for the male) and intervene with prologued regular mounting. If Trixie's reclusiveness increases dramatically, slow down the bonding process by reducing the amount of time they spend together.

Keep supervising them and you should see the overall mood of their interactions slowly improving. Rabbit bonding can take months in some cases, so patience is important. However, these two already seem to be doing excellent and so just keep up the great work! 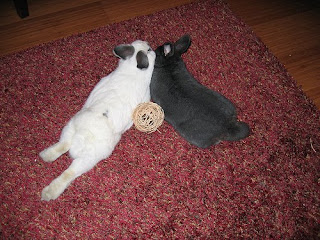